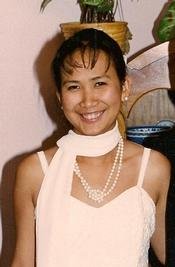 Sophia Noll Kamerow was born in Bangkok, Thailand on May 30, 1965 to Lamath Noll and Som Boon. She died at 2:35 PM on October 29, 2011 at the Mount Nittany Medical Center at 46 years of age. Sophia immigrated to the United States of America at 15 years of age in 1980. Sophia left her loving cousins, aunt, and uncle to begin a new life in a new country. She was sponsored by Michael Noll and arrived in Erie, PA with her brother Sam Sriroj. Sophia attended the Mcdowell High School in Erie, PA and then trained as a nurse for a year. She then enlisted in the US Air Force. She trained as a cardiopulmonary technician at Lackland Air Force Base in Texas and served her remaining military service at Travis Air Force Base in Sacramento, CA. Sophia was honorably discharged from the US Air Force after four years of service and she moved back to Pennsylvania to attend the Pennsylvania State University (PSU) to study Nuclear Engineer. Sophia met her loving husband in 1994 and took a leave of absence from the PSU. She married Harry Kamerow, MD on July 15, 1994 in Bellefonte, PA. Sophia's son, William (Billy) Noll Kamerow, was born on January 25, 1995. Sophia created a loving home in State College, PA for her growing family. She built the house of her dreams in Boalsburg, PA to raise her family under Tussey Mountain. Her daughter, Eleanora (Nora) Sharon Kamerow, was born on May 3, 1999. Sophia's home life was then complete. When Nora began elementary school, Sophia returned to school with renewed vigor. She returned to PSU to finish her degree in Nuclear Engineering. After graduation, Sophia matriculated into the doctoral program in Nuclear Engineering under the direction of Dr. Ivanov who served as a learned mentor and friend. Sophia's favorite places included the coast of Northern California, Hawaii, the southwestern coast of Thailand, and the warm beaches of Marco Island, FI. She was a superb cook, mother, student and wife. Sophia will be greatly missed by her family, friends, and colleagues. Sophia's hopes, dreams, and aspirations will live on in her beloved children. May God bless her soul. Services will be private at the convenience of the family. Arrangements are under the care of Koch Funeral Home, State College. Online condolences may be made at www.kochfuneralhome.com.
To send flowers to the family or plant a tree in memory of Sophia Kamerow, please visit Tribute Store

A Memorial Tree was planted for Sophia
We are deeply sorry for your loss ~ the staff at Koch Funeral Home
Join in honoring their life - plant a memorial tree
Services for Sophia Kamerow
There are no events scheduled. You can still show your support by sending flowers directly to the family, or planting a memorial tree in memory of Sophia Kamerow.
Visit the Tribute Store
Print
Share A Memory
Send Flowers
Plant a Tree