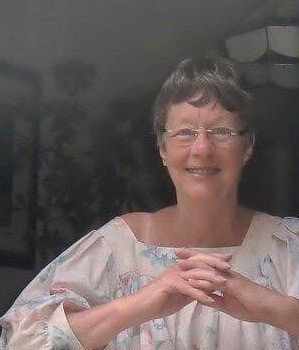 Patricia Brown Braun of State College, Pennsylvania died on March 5, 2020 at Mt Nittany Medical Center in State College, PA. She was born in Philadelphia, Pennsylvania, the second child of Paul Christian Heim Walz and Marian Hughes Walz. After her father, a graduate of West Point, died at 26, she and her brother Paul were adopted and reared by Marian and their stepfather, John Arthur Brown, Jr. Patricia was preceded in death by her former husband Robert Edward Braun and her son Stephen Naylor Braun. She is survived by her brother, Paul C. Brown, her daughter Ellen Hughes Braun, and her son Jeffrey Thomas Braun. She will be remembered with love by her many nieces and nephews and a host of family pets, of the retriever variety. Pat attended the Springside School in Chestnut Hill, Philadelphia, where she cultivated a love of manners, learning, and sports that she carried through her life. She was a natural athlete, starring in lacrosse, hockey, and her lifelong love, tennis. She graduated from Springfield High School in Montgomery County and attended Penn State, where she was a member of the Kappa Alpha Theta Sorority, and pursued a degree in Home Economics. The fact that chemistry was not her strong suit may have influenced her decision to complete her Mrs degree at Drexel University. She taught Home Economics at Woodrow Wilson High School before leaving teaching to start a family. Pat was a woman of strong conviction and open mind. As her husband's career advanced, and her family grew, she navigated their journey as they moved around the country, from Chestnut Hill PA to Roslyn PA, Lutherville MD, Camp Hill PA, Barrington IL, Doylestown PA, and finally State College, PA. Fiercely independent, she fortified her family life with a fearsome tennis game and a secret diet of hot fudge sundaes with extra hot fudge, warm chocolate chip cookies and brownies, and Coke, not Pepsi. She was known to say "those who are bored are boring", and she was certainly never either. In her later years in State College, PA, she was a familiar face at The Waffle Shop and The Corner Room, where a photo of her from her college years hangs on the wall. A memorial gathering in celebration of Pat's life will be held at a future date. Memorial contributions may be made to The Fonthill Woodlands Project, https://www.mercermuseum.org/support/fonthill-woodlands-project/. Any contribution to an animal related charity of your choice would also be appreciated. Arrangements are under the care of Koch Funeral Home, State College. Online condolences and signing of the guest book may be entered at www.kochfuneralhome.com or visit us on Facebook.
To send flowers to the family or plant a tree in memory of Patricia Braun, please visit Tribute Store
Services for Patricia Braun
There are no events scheduled. You can still show your support by sending flowers directly to the family, or planting a memorial tree in memory of Patricia Braun.
Visit the Tribute Store

Share Your Memory of
Patricia
Upload Your Memory View All Memories
Be the first to upload a memory!
Share A Memory
Send Flowers