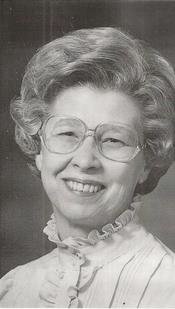 Florence S. Curley, 86, of State College, died Friday, December 23, 2011, at the Fairways at Brookline Village. Born March 16, 1925, in St. Mary's, she was a daughter of Ralph and Thecla Schatz. She married William N. Curley on August 27, 1947 who preceded her in death on June 26, 1996. She is survived by her children, Stephen R. Curley and his wife, Judith, of State College, John J. Curley and his wife, Kathleen, of Clifton Park, NY, Michael K. Curley and his fiance, Mary Rodman of Mechanicsburg, Timothy M. Curley and his wife, Melinda of State College, William G. Curley and his wife, Barbara of Beech Creek, and Terence P. Curley and his wife, Lorrie of Chester, Va. She is also survived by 12 grandchildren Kevin and wife Allison, Greg and wife Jennifer, Matthew and wife Laurie, Patricia, Emily, Devon, Tanner, Lisa, Jenna, Will, Aaron, and Hannah, and three great-grandchildren Caroline, Nathanial, and Gabriel. In addition to her parents and husband, she was preceded in death by two brothers, Edward and Robert. She received her Bachelor's Degree from the Indiana University of Pennsylvania in 1947. Florence was a bookkeeper at Bostonian Limited for many years. She was very active and supportive of State College Area High School and Penn State sports. She took great joy in watching her children and grandchildren participate in their sports activities. She was a member of Our Lady of Victory Catholic Church and attended Penn State Catholic Ministry. Her visitation will be held on Monday, December 26, 2011 from 2-4 and 6-8pm at Koch Funeral Home, 2401 S. Atherton St., State College. A Funeral Mass will be held on Tuesday, December 27, 2011 at 10:30 Am at Our Lady of Victory Catholic Church, 820 Westerly Parkway, State College with Monsignor David A. Lockard officiating. Interment will be in St. Mary's Catholic Cemetery, St. Mary's. Memorial contributions may be made to the William N. and Florence S. Curley Athletic Scholarship Endowment, 101 Old Main, Penn State University, University Park, PA 16802. Arrangements by Koch Funeral Home, State College. Online condolences may be made at www.kochfuneralhome.com.
To send flowers to the family or plant a tree in memory of Florence Curley, please visit Tribute Store

A Memorial Tree was planted for Florence
We are deeply sorry for your loss ~ the staff at Koch Funeral Home
Join in honoring their life - plant a memorial tree
Services for Florence Curley
There are no events scheduled. You can still show your support by sending flowers directly to the family, or planting a memorial tree in memory of Florence Curley.
Visit the Tribute Store
Print
Share A Memory
Send Flowers
Plant a Tree