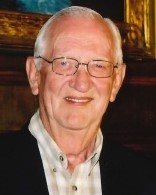 Steve graduated from Sunbury (PA) High School where he played football and wrestled. Following military service in the Army during World War II, Steve attended trade school, then purchased a small "Mom and Pop" grocery store in Tharptown, PA. In the 1950's while residing in the Shamokin, PA area, he taught Sunday School at Trinity Episcopal Church. Several years later he sold the business and became Weis Markets' first manager trainee. Steve's family relocated to State College around 1957 where he managed the Westerly Parkway Weis Market until his retirement. His store was awarded "The President's Award for Outstanding Performance and Customer Satisfaction" several times. He especially liked interacting there with community members. Steve was a former communicant and vestryman at St. Andrew's Episcopal Church in State College.

Steve was a bowler and golfer. Becoming an avid golfer in his retirement years, he enjoyed golfing at Tory Pines Golf course in San Diego as well as golfing in Hawaii. Additionally, he was fortunate to have attended practice rounds at the Masters Tournament in Augusta, GA twice. In 2006 he experienced a hole-in-one on Penn State's Blue Course. In retirement Steve enjoyed working the Founder's entrance at Penn State's Bryce Jordan Center for various events.

A visitation will be held from 1PM—3PM on Saturday, July 17, 2021 at Koch Funeral Home, 2401 S. Atherton St., State College, with service and burial to follow, officiated by Reverend Jeffrey Packard.

Arrangements are under the care of Koch Funeral Home, State College. Online condolences and signing of the guest book may be entered at www.kochfuneralhome.com or on our Facebook page.

To send flowers to the family or plant a tree in memory of Richard Stephenson, Sr. , please visit Tribute Store
Saturday
17
July