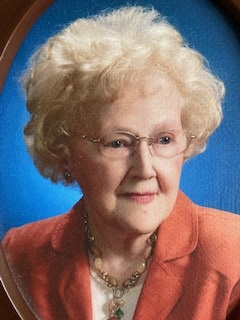 Atha was a 1942 graduate of Chambersburg Area Senior High School where she was described as "perky, short and snappy". She was a long-time member of the Salem Lutheran Church in Pleasant Hall, PA where she sang in the choir and taught Sunday School. She was a lady with a strong faith in God who prayed and read the Bible daily. She attended the church service held at Wynwood House the Sunday prior to her passing.

Atha was a talented seamstress, a teacher's aide, and a homemaker. However, her favorite vocation was that of being a loving mother, grandmother, and great-grandmother. She was a role model for loving parents; and her family reciprocated that love.

The family would like to thank the staff at Wynwood House for their love and care during the past three years of Atha's residency at their State College location.

Arrangements are under the care of Koch Funeral Home, State College. Online condolences may be entered at www.kochfuneralhome.com or Koch's Funeral Home on FACEBOOK. No services are planned.

Share Your Memory of
Atha
Upload Your Memory View All Memories
Be the first to upload a memory!