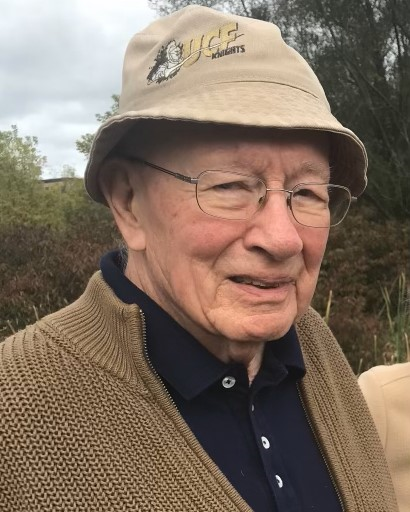 William (Bill) Joseph McHale PhD, 93, of Foxdale Village, State College, passed away on September 29, 2021. Born in Scranton on September 19, 1928, he was the son of the late Anthony F. and Victoria Kenny McHale. He is survived by his wife, Barbara R. Price.

Bill graduated from Scranton Technical High School and received his undergraduate degree in Art Education from the Kutztown State Teachers College. Following Bill's graduation from Kutztown, he served as a Lieutenant navigator in the United States Air Force. After Bill's service in the Air Force, he attended Penn State University Main Campus where he received his Masters and Doctorate degrees in Art Education.

While a high school student, Bill painted "The Route of the Phoebe Snow" mural, located on the wall behind the counter in the old historic Tony Harding's Diner, Lackawanna Ave., Scranton. The mural was well known among passenger rail travelers who would frequent Tony Harding's, coming and going from the nearby Delaware, Lackawanna and Western (DL&W) Railroad Station. The mural, measuring 39 feet long by 45 inches wide, depicted the DL&W's mythical sweetheart "Phoebe Snow" passenger train. The stylish and grand passenger train was named "Phoebe Snow" to promote the modernization of DL&W's passenger fleets, using locomotives powered by the clean-burning anthracite coal, mined in Northeastern PA.

After spending a year teaching at Oklahoma State University, Bill returned to Penn State University Park as a professor in their College of Arts and Architecture until his retirement. He also served as Dean of Students in the College for many years. Due to his extensive knowledge in the Arts and Architecture, Bill was a member of various national and regional college and university accreditation commissions.

In his retirement, Bill enjoyed travel, reading and spending time with family.

At Bill's request, there will be no funeral or memorial service.