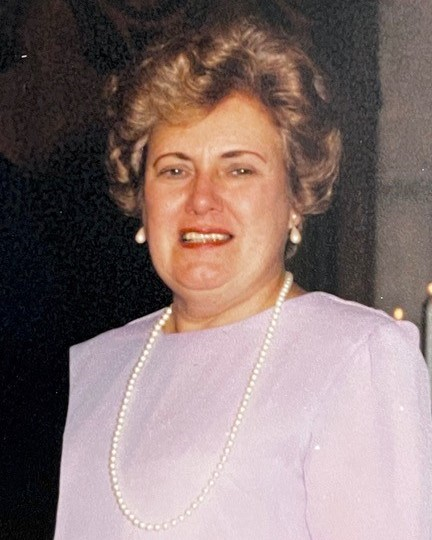 She is survived by her two daughters, Ellen Garcia and her husband Dana of Venetia, PA and Christina Mattioli and her husband Terry of York, PA. She was the doting Yia Yia to her three adored grandchildren, Alexandra and James Garcia (both students at Penn State University) and Victoria Mattioli (a student at West Chester University). She also leaves behind her brother-in-law Gary Miller of North Tonawanda, NY and her sister-in-law, Anne Giopulos of Jamesville, NY and numerous nieces and nephews. She was preceded in death by her sister, Marilyn Miller of Tonawanda, NY.

After graduation from Kenmore High School in Kenmore, NY, Arlene attended the University of Buffalo and then began her administrative career at the former Bell Aircraft in Buffalo, NY. After meeting the love of her life, Jim Thompson of Warsaw, NY, she and Jim were married and moved to State College, PA so that he could complete his Masters and Doctoral degrees. There she worked as an Assistant to the Dean of the College of Architecture and Architectural Engineering at Penn State University. She later worked in the English Department at State College High School until her retirement.

Those who knew Jim and Arlene were always amazed at how they fit together like two perfect puzzle pieces. When Jim passed in 2014, it was like not being able to complete your favorite puzzle because one crucial piece was lost. It was so fitting that she passed away the day before Valentines Day as she can now be with her forever Valentine.

Arlene was a member of St. George Greek Orthodox Church in Altoona, PA. Although she may not have been born Greek, Arlene became the family's keeper of all Greek traditions including making her wonderful Greek dishes. As her mother-in-law would later say, "No one makes spanakopita like Arlene!". Arlene always enjoyed her friends and celebrating life. She was an avid bowler with a number of 300 games to her credit. She also enjoyed getting together with friends for bridge and other games. Arlene was the person you would imagine when you pictured the perfect neighbor. Arlene had a special way of making everyone she met feel like they truly mattered.

Nothing gave Arlene more joy that being with her family and especially being with her grandchildren. A day with Yia Yia was sure to include lots of games, crafts, food and just generally being spoiled. No holiday or vacation was ever spent without be surrounded by family and she was always at the heart of the joy and laughter.

Private burial will be in Spring Creek Presbyterian Cemetery with a memorial service to celebrate her life at a later date.

It was Arlene's wish that memorial contributions be directed to the Penn State chapter of Uplifting Athletes (www.upliftingathletes.org), a national charity started by members of the Penn State football team focused on funding research for cures to very rare diseases.

To send flowers to the family or plant a tree in memory of Arlene Thompson, please visit Tribute Store

Share Your Memory of
Arlene
Upload Your Memory View All Memories
Be the first to upload a memory!
Share A Memory
Send Flowers
Plant a Tree