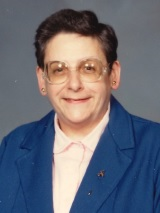 Born December 25, 1928, in State College, she was the daughter of the late Charles F. and the late Mabel Grace Koch Martin.

She is survived by two nieces, Dianna Johnson (Randy) of Spring Mills, PA, and Beverly Schade (Mark) of Lewes, DE, and two nephews, Daniel Schaaf (Kathy Mills) of Beavercreek, OH and Charles Schaaf (Sandra) of Fredericksburg, VA. In addition to her parents, she was preceded in death by her two brothers, Daniel Mothersbaugh, and Harry Eugene Martin, her sister, Ruth Schaaf, her niece, Stephanie Schaaf and her nephew, Charles Martin.

Ada was a 1946 graduate of State College High School.

She retired in 1990 after 44 ½ years as an Assistant Cashier for Mellon Bank.

Ada was a member of Fairbrook United Methodist Church and the Baileyville Grange. She was a fan of Penn State football and an avid reader.

Services will be private, at the convenience of the family.

In lieu of flowers, memorial contributions may be made to Fairbroook United Methodist Church, 4201 W Whitehall Road, Pennsylvania Furnace, PA 16865.

Share Your Memory of
Ada
Upload Your Memory View All Memories
Be the first to upload a memory!
Share A Memory