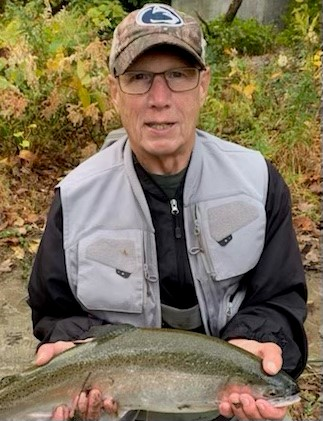 John graduated from Scranton Prep in 1970. He earned his bachelor's degree in chemistry from Penn State University in 1974, and his master's degree from Rutgers in 1980. He worked as a research and development chemist at American Cyanamid in Princeton, NJ, as a research and development manager at Albemarle in Tyrone, PA, and the last nine years as a consultant for Universal Display Corp. He earned numerous scientific achievement awards and was a named inventor on multiple patents. Throughout his career, his intelligence and great sense of humor, were admired by all.

John enjoyed fly fishing, tying flies, playing classical guitar, tennis and gardening. In 1998, he co-founded the Little Juniata River Association, when he became concerned about the macroinvertebrate health on the river.

To send flowers to the family or plant a tree in memory of John Pascavage, please visit Tribute Store

A Memorial Tree was planted for John
We are deeply sorry for your loss ~ the staff at Koch Funeral Home
Join in honoring their life - plant a memorial tree
Services for John Pascavage
There are no events scheduled. You can still show your support by sending flowers directly to the family, or planting a memorial tree in memory of John Pascavage.
Visit the Tribute Store

Share Your Memory of
John
Upload Your Memory View All Memories
Be the first to upload a memory!
Share A Memory
Send Flowers
Plant a Tree