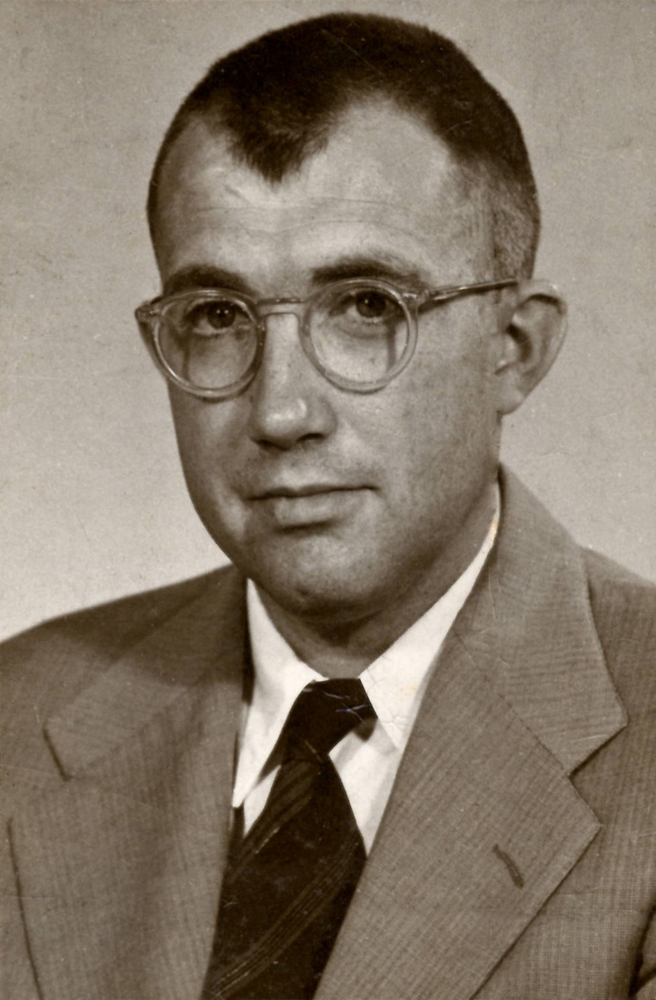 He might have had a musical career; he played sousaphone and tuba in high school, college and community bands, and trombone in the big-band minor leagues. His college choir director wanted him to major in voice performance. But he was a realist; he majored in physics (BS, Parsons College, Fairfieid IA, 1945) and found prompt employment. He taught high school math at Birmingham IA, then went to SUl (lowa City) and ISU (Ames) for graduate assistantships in physics.

In 1948 he went to the National Advisory Committee for Aeronautics (predecessor of NASA) at Langley Field, VA, where he worked on the development of temperature, pressure and air-speed sensors. In 1951 he went to the U. S. Naval Air Development Center (NADC, Warminster, PA) and worked in infrared optics. At Temple University he taught graduate physics courses at NADC, enabling him to complete a master's degree in 1954. In 1956 he went to State College, PA, where he worked in infrared optics and industrial automation projects for HRB-Singer. After HRB-Singer's 70% downsizing in 1970 he became a full-time Penn State graduate student and completed a PhD in Solid State Science in 1972. From 1972 to 1976 at Scitek, Inc. he worked on the application of physical anomalies for the detection and location of unexploded bombs and shells buried in soil by impact. He went to Penn State's Applied Research Laboratory in 1976 and worked in acoustics, magnetics, and lidar; retired in 1996. He was author and co-author of 25 papers in scientific and engineering journals.

He enjoyed camping, swimming in the Science Park Pool, skiing at Tussey Mountain, playing trombone, baritone or tuba (as the occasion required) in the Little German Band and trombone in the State College Municipal Band. Singing in the choir of Holy Trinity Orthodox Church was the peak of his musical career.

Visitation will be 6 until 7 pm, Monday, September 26, 2022 at Holy Trinity Orthodox Church, 119 S. Sparks St., State College, with a memorial service following at 7 pm. A second visitation will be 10 until 11 am, Tuesday, September 27, 2022 at the church, with a funeral service following at 11 am. Father Ignatius Hunter will officiate the services.

Burial will be in Pine Grove Mills Cemetery.