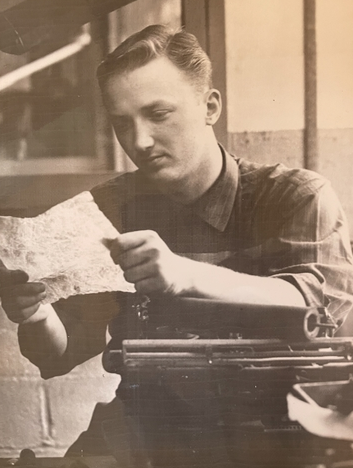 He was a 1954 graduate of the Roman Catholic High School, Philadelphia, PA.

Daniel retired in 1998 as a Zone Account Manager for Frito Lay where he worked for 22 years.

He was an avid collector of figurines depicting see no evil, hear no evil and speak no evil. You could say this was a reflection of how Daniel lived his adult life. To his family, Daniel was the steadfast anchor of the Machons, a fierce protector but a caring and gentle heart to accompany it. He praised his family's accomplishments and supported their forthcomings. He had pride in his large family and kept them connected through email and traditional mailings. He was an accomplished man. One of his biggest accomplishments he would have told you was marrying the love of his life, Patricia. In a happenstance and serendipitous way, they met and fell in love after his musical gig where he played the drums. They built a beautiful life together, created a large and loving family and enjoyed every moment together along the way. He loved his routine life with his wife at home, often enjoying shows and movies together and spending time with each other over their favorite meals. Those who knew him, recall him as a light in life. Daniel had a magical way of making sure those around him were enjoying life and the moments they shared. You could always count on him to make light of any situation no matter how dark and unprecedented it felt. Daniel touched many lives unselfishly and without hesitation, giving away his wisdom for those who needed it. Daniel was a one of kind man with a sarcastic sense of humor that anyone who called him a friend or family member will remember forever.

A celebration of life is scheduled for Sunday December 11th 2022 from 12pm-3pm at The Shop, 129 Snyder Brook Lane, Bellefonte, PA. Family, friends and those wishing to pay respects to Daniel Machon and his family are welcome.

In lieu of flowers, memorial contributions may be made of the giver's own choice.

To send flowers to the family or plant a tree in memory of Daniel Machon, Sr., please visit Tribute Store
Sunday
11
December

Share Your Memory of
Daniel
Upload Your Memory View All Memories
Be the first to upload a memory!
Share A Memory
Send Flowers
Plant a Tree