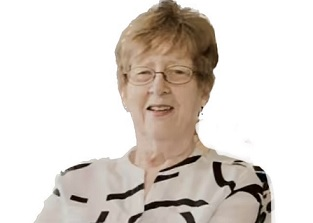 Obituary of Judith B. Rushing

In the summer of 1962, Judy went on vacation to Sherkston, Ontario, Canada. This is where she first noticed a great pair of legs and then met the man with those legs – James C. Rushing. A year later, June 8, 1963, Judy and Jim wed and drove from Buffalo, New York to Fort Huachuca, Arizona in Judy's VW Bug.

Heather Jane came along in 1964 followed by Michael James in 1967. Judy was a great Mom, wife, and the heart of the family. Over the years she and Jim had lifelong friendships with neighbors including the Nishikawas, the Watsons, the Hoovers, the McCoskeys, the Sherburnes, the Wongs and the Tarts.

Judy was a very empathetic person who was prone to worrying about everyone's well being. She truly felt others' pain and would either worry or help - including writing kind notes, making calls, bringing food, organizing activities and spending time with people.

Judy was very appreciative of Jim's caregiving team – Karen, Bernadette, Gail, and Kailee. She would often write notes of appreciation. The team helped Judy with her care needs over the past month. They were there for her until the very end. It helped give her peace of mind knowing that Jim would be in good hands between the family and the caregiving team supporting him.

Before Judy and Jim moved to Foxdale three and a half years ago, they were blessed to have their son Mike and his family live next door for almost 13 years. Their dog Kirby knew where to run when given the command, "Go see Grandma."

In recent months Judy enjoyed her family and the caregivers' group she attended. Judy always looked to provide some laughter to the caregivers. In the past few weeks, she had unexpected visits from her friend Carolyn as well as Heather's childhood friend Denise. Both visits included laughter. Heather was able to spend a lot of time staying with Judy over the past few months with the continual support of her husband Mike Whalen. Heather's son Chris spent three months in the last year as a caregiver for Jim. Heather's son Matt called regularly from Texas and told funny stories to make Mema laugh. Grandma enjoyed hearing about both Chloe and Mia's school work and social lives. Because of the continued steady support of both Mike and Sylvia, Judy and Jim have been able to navigate a pandemic as well as deal with a variety of medical challenges.

In her last days of life, Judy's husband, her kids, their spouses, and the grandkids all spent time with her. Till the end she was concerned about each family member. She wanted Jim to have good days. She wanted the Mikes to get their knee surgeries. She wanted Heather home before dark. She wanted Sylvia to have peace. She wanted her four grandkids to all be happy.

Judy is survived by her loving husband of 59 ½ years – Jim; her daughter Heather Rushing Whalen, Heather's husband Mike Whalen as well as Heather's sons Chris and Matt Child; and her son Mike Rushing, his wife Sylvia Santos Rushing along with their daughters Chloe and Mia.

A private celebration of life will take place at a future time. Memorial contributions may be made to donorschoose.org.

Share Your Memory of
Judith
Upload Your Memory View All Memories
Be the first to upload a memory!
Share A Memory