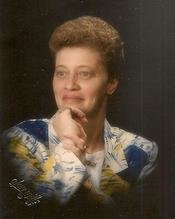 Carol Jean Smith, 66, of State College, died Friday, March 16, 2012, at Mount Nittany Medical Center, State College. Born July 27, 1945, in Bellefonte, she was a daughter of the late Kenneth and Betty Jean Wian Walker. She married Edward Eugene Smith on July 27, 1977, who survives. She is survived by one daughter, Tonya Jean Styers, of Milesburg, two sisters, Millie Dreese, of State College, Peggy Haines and her husband, Robert, of Houtzdale, two brothers, George Walker and his wife, Mary, of Pine Grove Mills, Danny Walker, of State College, three grandchildren, Amanda Lynn Young, of Altoona, Carolelizabeth Mills and her husband, Corey, of Tyrone, Robert Edward Young, of Milesburg and two and a half great grandchildren, Connor Kelley, Dominic Peo and Caeleigh Jean. She was preceded in death by a brother Kenneth Walker and a sister Amy Walker. Carol was a 1963 graduate of State College Area High School. She was an appliance saleswoman for Sears. Funeral service will be at 7:00 p.m. on Wednesday, March 21, 2012 at Koch Funeral Home, 2401 S. Atherton St., State College Memorial contributions may be made to Easter Seals Child Development Center at 383 Rolling Ridge Drive, State College, PA 16801. Online condolences may be made at www.kochfuneralhome.com.
To send flowers to the family or plant a tree in memory of Carol Smith, please visit Tribute Store

A Memorial Tree was planted for Carol
We are deeply sorry for your loss ~ the staff at Koch Funeral Home
Join in honoring their life - plant a memorial tree
Services for Carol Smith
There are no events scheduled. You can still show your support by sending flowers directly to the family, or planting a memorial tree in memory of Carol Smith.
Visit the Tribute Store
Print
Share A Memory
Send Flowers
Plant a Tree