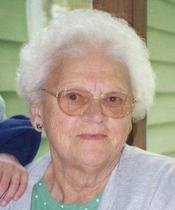 Ermatrude E. McClellan "Trudy", 91, of Port Matilda, died Sunday, August 5, 2012 at her residence. Born May 5, 1921, in Benner Township, she was a daughter of the late Vincent A. and Edna S. Herkimer Spearly. She married Elwood C. McClellan on September 15, 1939 who preceded her in death in June 1995. She is survived by a son, Lester E. McClellan and his wife, Marie Mary, of Bellefonte, a daughter, Delores A. Breon and her husband, Donald, of State College, six grandchildren, eleven great grandchildren and five great great grandchildren. She was preceded in death by a son, Frederick L. McClellan in November 2003. Ermatrude attended Bellefonte Area High School. She was employed by Murata Erie retiring in 1983. She was a charter member of Trinity Lutheran Church in State College. Visitation will be held from 10 a.m. to 12 p.m. on Thursday, August 9, 2012 at the Trinity Lutheran Church, 2221 North Oak Lane, State College, PA 16803. A funeral service will follow at 12 p.m.at the church with the Rev. Michael B. Price officiating. Burial will be in Centre County Memorial Park. Memorial contributions may be made to the Trinity Lutheran Church, 2221 North Oak Lane, State College, PA 16803 or Home Nursing Agency, 450 Windmere Dr. #100, State College, PA 16801. Online condolences and signing of the guest book may be entered at www.kochfuneralhome.com.
To send flowers to the family or plant a tree in memory of Ermatrude McClellan "Trudy", please visit Tribute Store

A Memorial Tree was planted for Ermatrude
We are deeply sorry for your loss ~ the staff at Koch Funeral Home
Join in honoring their life - plant a memorial tree
Services for Ermatrude McClellan "Trudy"
There are no events scheduled. You can still show your support by sending flowers directly to the family, or planting a memorial tree in memory of Ermatrude McClellan "Trudy".
Visit the Tribute Store
Print
Share A Memory
Send Flowers
Plant a Tree