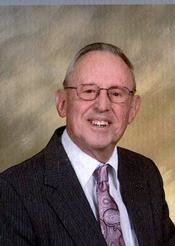 Robert L. Homan, 74, of Pa Furnace, died Thursday, August 16, 2012 at Mount Nittany Medical Center, State College. Born March 20, 1938, in Bellefonte, he was a son of the late Lee A. and Helen Smith Homan. He married Laura Dreibelbis on February 2, 1963 who survives. He is also survived by three children, Daniel L. Homan and his wife Lisa, of Katy, TX, Allen H. Homan and his wife, Amy, of Spring Mills, Sherri Lynn Homan, of Sanford, NC, a sister, Shirley Hoover and her husband, James, of Grand Blanc, MI and five grandchildren, Seth, Jenna, Cole, Peyton and Lucas. He was preceded in death by a son, Garen R. Homan on August 12, 1993. Robert was a 1956 graduate of State College Area High School and served in the US Air Force.. He received an associate degree from the PSU Altoona Campus in Electronics Engineering graduating in 1963. He was employed by Penn State University as a Research Technician retiring in 2003. Prior to working at PSU he was employed with HRB-Singer and Leco. He was a member of the St. John's United Church of Christ in Boalsburg where he served on the ministry committee, Northern Association; Baileyville Grange, Pa State Grange and National Grange. He was part of the Grange Fair Gate Committee for thirty three years. He was also a member of the Odd Fellow Lodge #1032 in State College and Grand Encampment, Lady Emily Rebekah Lodge #452 and was the manager of Windmere Hall and a member of the Centre County Mutual Fire Insurance Company. Visitation will be 1:00 to 4:00 p.m. with an Odd Fellow & Rebekah Service following at 4:00 p.m. and 6:00 to 8:00 p.m. with a Grange Service following at 8:00 p.m. on Sunday, August 19, 2012 at Koch Funeral Home, 2401 S. Atherton St., State College. A visitation will be held from 10:00 a.m. until the time of service. A funeral service will be held at 11:00 a.m. on Monday, August 20, 2012 at St. John's United Church of Christ, 214 North Church St., Boalsburg, PA with the Rev. Monica Ouellette. Burial will be in Pine Hall Cemetery. Memorial contributions may be made to St. John's United Church of Christ, 214 North Church St., Boalsburg, PA 16827. Online condolences and signing of the guest book may be entered at www.kochfuneralhome.com.
To send flowers to the family or plant a tree in memory of Robert Homan, please visit Tribute Store

A Memorial Tree was planted for Robert
We are deeply sorry for your loss ~ the staff at Koch Funeral Home
Join in honoring their life - plant a memorial tree
Services for Robert Homan
There are no events scheduled. You can still show your support by sending flowers directly to the family, or planting a memorial tree in memory of Robert Homan.
Visit the Tribute Store
Print
Share A Memory
Send Flowers
Plant a Tree