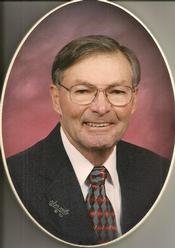 Dan Warren Stearns, 85, of State College, died Sunday, February 27, 2011, at Mount Nittany Medical Center. Dan was born, raised and lived all his life at Spring Lea Farms, Houserville Road. Born October 20, 1925, he was a son of the late Guy W. and Mary Bottorf Stearns. On June 5, 1948, he married Anna Hassinger, who survives him. He is also survived by a daughter, Diane Stearns of Blacksburg, Va.; a son Dan T. Stearns and his wife, Melinda, of State College; four grandchildren, Andrew Stearns of Denver, Colo., Matthew Karfakis of Charlotte, N.C., Julie Karfakis of Arlington, Va., and Evan Stearns of State College; and a great-granddaughter, Kyra Karfakis of Blacksburg, Va. Dan was a 1943 graduate of State College High School, and earned a Bachelor's in Agricultural Education from Penn State in 1950. He served in the U.S. Marine Corps during WWII and Korea, attaining the rank of Staff Sergeant. Dan was a farmer, builder and developer. He was a very active member of Grace Lutheran Church in State College. He was a life member of the Penn State Alumni Assoc. and of the Nittany Leathernecks Detachment of State College. He was a life member of the Sixth Marine Division Assoc., the Marine Corps Assoc., the China Marine Assoc., and the U.S. Marine Corps Force Recon Assoc. He was also a life member of the State College Elks Lodge 1600 and of the American Legion Post 245 of State College. He was a member of Gamma Sigma Delta Honorary Agriculture Fraternity and Alpha Tau Alpha Agricultural Education Fraternity. He was a 30-year member of the Centre Squares square dance club, and a member of the Nature Conservancy. He was a former member of the State College School Board. Visitation will be from 10 to 11 a.m. on Thursday, March 3, at Grace Lutheran Church, State College. Dan's funeral service will follow at 11 a.m. at the church with Reverend P. Stevens Lynn officiating. Burial will be at Centre County Memorial Park. Memorial contributions may be made to Grace Lutheran Church, Building Fund, 205 S. Garner St., State College, PA 16801, or to the charity of the donor's choice.
To send flowers to the family or plant a tree in memory of Dan Stearns, please visit Tribute Store

A Memorial Tree was planted for Dan
We are deeply sorry for your loss ~ the staff at Koch Funeral Home
Join in honoring their life - plant a memorial tree
Services for Dan Stearns
There are no events scheduled. You can still show your support by sending flowers directly to the family, or planting a memorial tree in memory of Dan Stearns.
Visit the Tribute Store
Print
Share A Memory
Send Flowers
Plant a Tree